Audible / Edible Kitchen, interactive audio cooking performance by a young Croatian artist Nera Miočić; an ambiental experience of food that experiments with breaking free from the boundaries of traditional recipes. Based on the premise that organisms vibrate at specific frequencies – the human body vibrates on a frequency between 62 and 72 Hz, and each living ingredient also has its own frequency, a soundscape is created by the frequencies of the ingredients used in the performance.

The space is filled with melodic frequencies of ingredients, trees, the sounds of food being prepared on the spot in front of the audience, sand, light and other elements. The artist caters to all of our senses in a predominantly artificial environment created through communication between her and the visitors. The audience bring their own food and enjoy the meals that are prepared, while the preparation of food and feeding turns into communication: a transmission of one's own energy and reception of someone else's energy depending on the natural intelligence of our bodies. 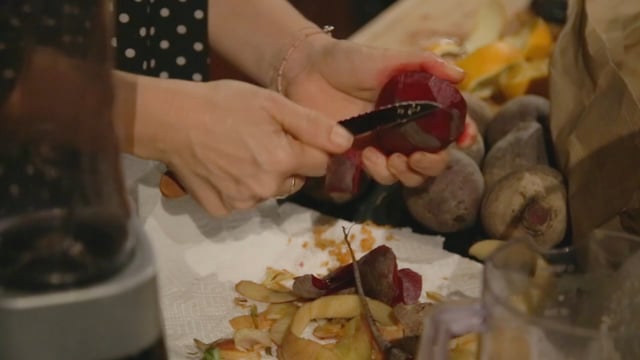 Nera Miočić, finished her studies at the Academy of Arts in Split in 2010, at the Film and Video Department. She creates films, installations, artist books and performances. She is currently a student of the graduate programme at the Academy of Fine Arts in Zagreb at the Department of Animation and New Media. She has taken part in many film and art projects and exhibited at several group exhibitions and public performances in Zagreb, Split, Belgrade and London. Within the scope of the projects she has worked on, she has organized interactive and educational workshops for film, video and sound.